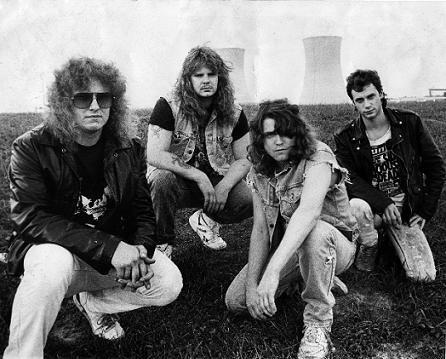 "Edge Of Wasteland" (2019): Not to be confused with the 2008 album "Edge of Wasteland", recorded but never released as the band broke up before it could be put out. Then entirely re-recorded with some songs replaced by the new song "Blood Red Sky". All other songs written in 1988 and 1989.

- Blood Red Skies (demo track, 2016)
- Guilty as Charged (five tracks (unfinished), 1989, started being recorded at TKO Studios but never completed). The artwork was later posted online by the band, and eventually incorrectly circulated through the web as the cover to a bootleg that claimed to be an original "Live Demo" (see below for more info).

- Edge of Wasteland (twelve-song full-length album recorded in 2008, the master reels were lost by the time of the 2016 reunion so 6 of the songs plus one new song were recorded in the studio in 2017 and 2019 to be released for the first time on their debut album, Blackened Void, whose title was eventually changed to "Edge of Wasteland and released digitally in September 2019, to be released on CD in December 2019.)
Live at the Phantasy Theater, November 16th 1989 - Promotional tape with some handwritten and some typewritten covers, only a handful made and sent out by the band in late 89-early 90. 12 Song Soundboard recording, which the band then had remastered at Modern Recording Services to further improve the sound. Some songs were posted to a tribute page in the early 2000s and were later bootlegged along with the "Guilty As Charged" artwork, as an apparent Live Demo "Live @ The Fantasy" (see below for more info on the differences between the original Promo tapes and the incomplete digital bootleg).


In 1989, the band initiated the recording of a five song demo demo at TKO Studios. At the time, local publications report that Fred had some problems with his throat, namely polyps on his larynx requiring surgery, taking a hefty toll on the amount of recording and live performance he was able to handle at the time. With the demo never finished, hence never released, Fred underwent throat surgery and after recovering for several months the band then went on to record a two-song demo at Beachwood Studios in 1989, which included the song "Deadline", which would appear on Auburn Record's Heavy Artillery compilation in the same year.

After the early 1990 break-up of Purgatory and the mid-1990 split of Chemikill, members of both band combined into a new band called Victor Fist consisting of 3/4 of the original Purgatory and half of the original Chemikill. They were only active from 1990 to 1991 and only played one show, at Flash's on June 30, 1990 (alongside Terror and the live debut of Mutilation). This hour and a half long set included three original songs ("Victor Fist", "The Game of Death" and "Fearless Wrath"), covers of crowd favorites from Chemikill and (both the Boyer and Hatrix-fronted eras of) Purgatory, as well as rare songs from the beginning of Chemikill such as "The Warrior" and "Guilty as Charged", the entirety of Purgatory's Dr. Pain tape (with a guest appearance from Boyer on "Mist of Dawn"), and even the Zyklóne track "Lovefire".

While Victor Fist was starting to write new material, Fred Flory formed the soon-to-be highly-regarded Cleveland band Captured, alongside Sam Romano (Centurion & Hatrix), Mike Burke, Dave Drotos, and Purgatory guitarist Frank Romano. They would soon became one of the most well-known bands in Cleveland at the time, becoming the resident band at the Cleveland Cafe and playing sold out sets every weekend. They played mostly covers of '70's-'80s rock and metal bands, but also had some original material that they never released, yet developed a large following around their high-energy live performances. After Captured started drawing really large crowds, Victor Fist disbanded, allowing Fred to focus on Captured.

In the early 2000s a Chemikill tribute page was made on MySpace, before the band reunited and made an official page. This tribute page posted 4 songs of the originally hour-long board-recorded concert at the Phantasy Theater on November 16th 1989. In 1989 the band had this soundboard recording remastered professionally and used the whole show as a promo tape briefly, planning to use it until "Guilty As Charged" was finished but instead they split up before that. This tribute page also posted a couple old band photos and the then-extremely rare original artwork for the unfinished "Guilty As Charged" demo. Sometime later somebody ripped the 2003 Myspace-upload quality songs, took the "Guilty" artwork and distributed them together, claiming it had been released as an official live demo called "Live at the Fantasy". Of course this isnt true, and some song titles (incorrectly shortened to "City Night" and "Fate Worse") as well as the venue name on the digital bootleg were incorrectly spelled. The two venues in-one-building that use the name are the Phantasy Theater and the Phantasy Niteclub, the original board recording of the show the songs came from has over 10 songs. Also, the handful of original copies of the remastered board tape that the band gave out had handwritten or typewritten covers with no artwork. Other songs on the original tapes that weren't bootlegged from MySpace are the show's opener "Screamin'", as well as "Blackened Void", "The Warrior", and others.

ωχ αμάν τα χάπια μου. το θέλω
We scribe in the dark of the night our Black Steele
The evil rite of the black and the light We now reveal to you
Κορυφή

Re: CHEMIKILL - Edge Of Wasteland

Re: CHEMIKILL - Edge Of Wasteland