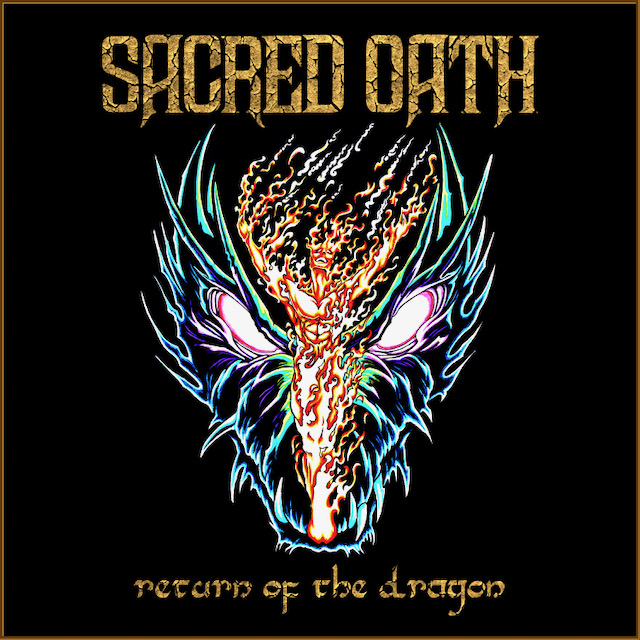 Sacred Oath have announced the “waterfall release plan” for their brand new album, Return Of The Dragon, available on April 2. The band is going to stream five album tracks at regular intervals along with original artwork, lyrics and video content.

The band will release the first single, “Return Of The Dragon”, on January 15 for streaming and download on all digital platforms, including a lyric video. The single features cover artwork by drummer Kenny “Thundarr” Evans, who has previously designed covers for the band, as well as several of the band’s logos.

Subsequently, Sacred Oath will release four more singles on January 29, February 12, February 26, and March 19. Each piece will feature a new and unique cover painted by Evans. Platforms like Spotify and YouTube will also feature each art piece on video and canvas.

Pre-order for both the deluxe CD and double LP editions will begin on January 29 exclusively on the band’s website. These editions will be limited-edition pressings of 500 copies and LPs will be hand-numbered and signed. The CD will contain a 24-page booklet including all 11 original art pieces, lyrics, and photos.

Digital pre-order will begin on Spotify, Apple, and Amazon Music on March 19, with instant delivery of all five singles.

Return Of The Dragon is the first studio album to feature the newly officially added fifth band member - guitar and keyboard phenom Damiano Christian. Christian joined the band during the Twelve Bells At Midnight tour in 2017 and appears on the live album that followed in 2019, Thunder Underground – Live from NYC.

Sacred Oath is best-known for releasing A Crystal Vision in 1988, an album that evolved into a cult-classic of the powerthrash-metal genre. It was followed by six more critically acclaimed studio albums, including fan-favorites World On Fire, Sacred Oath, Darkness Visible, and Ravensong. The single “Counting Zeros” from their eponymous 2009 release was chosen as iTunes “Discovery Download of the Week”, and their first live album Till Death Do Us Part (2008) was listed as a Top Ten Metal Album of the year by Apple Music in its year of release. The band appeared on MTV2 Headbangers Ball in its last televised season with a featured interview.

τους έχασα μετά το World On Fire...
We scribe in the dark of the night our Black Steele
The evil rite of the black and the light We now reveal to you
Κορυφή