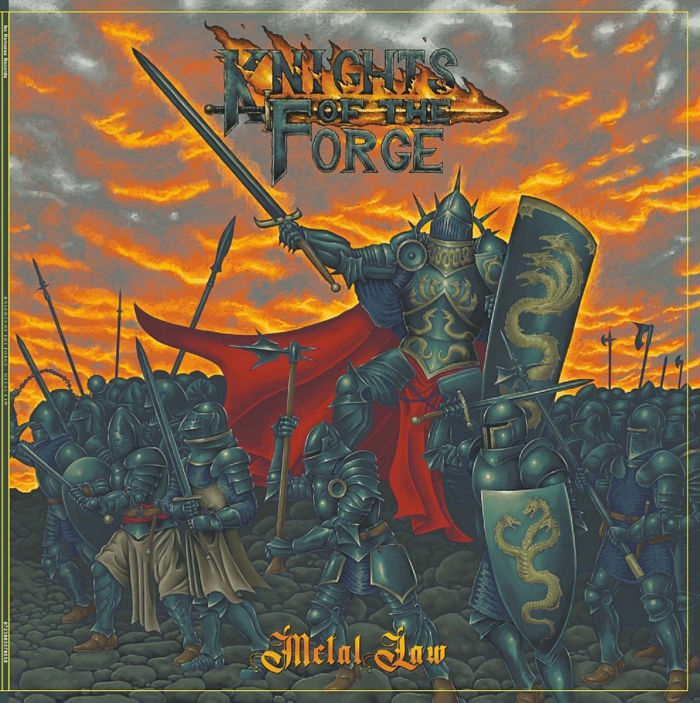 
Knights of the Forge from Virginia, USA, joined No Remorse Records.

The band was formed in 2013 by Samuel Schaefer and Paul Hissam, and after a promo recording in 2014, they started working on the debut album for a long time, inspired by bands such as Manowar, Manilla Road, Judas Priest and early Iced Earth.

The band's debut album is already recorded, mixed and mastered, and will be set for release in the coming months. The album is recorded by Samuel Schaefer (vocals, guitars), Paul Hissam (bass), Nathan McKinney (drums) and special guest Jeff Black of Gatekeeper (guest guitar solos, piano).

All details will be revealed on time, but expect nothing less than passionate and raw epic heavy & power metal.

Yesterday, No Remorse Records announced that the US-based band Knights of the Forge joined our roster. The album is already recorded, mixed and mastered, layout for both vinyl and CD is completed, everything is ready for one more release. Then, within a few hours after the announcement, we received messages and comments stating that this is a "bad" choice. Of course, what is "bad" or "good" in terms of music (just like everything in art) is also a matter of taste, and if the label believes in one release, it doesn't matter what a few people will say.

However, what is "bad" might not always be related to the music and art itself, and as it seems, this is the case here according to the messages we received. No Remorse Records is not a political record label. No Remorse Records is all about the music as far as it concerns the artists we're working with, and not a random album that's just added in the online and physical store. However, for the musicians we're working directly with, we can't ignore issues that can damage our reputation and/or beliefs and acts that are opposite to the label's profile and its people's personal beliefs. We can't always know what each musician we're working with and lives to the other side of the Atlantic Ocean has done. Especially when we haven't met all of them in person.

With that said, No Remorse Records will investigate the case, will talk with the band members about it, and will decide what will be the proper thing to do.

Thanks for the attention,
No Remorse Records

The time has come for us to break our silence.

As you likely already know, we have been unceremoniously dropped from No Remorse Records in perhaps one of pathetic displays of baseless witch hunting we have ever seen. Heavy metal is in a truly sad state if you hadnt noticed. Counting likes and comments, screams heavy metal. Literally all you have to do to take control of No Remorse Records is make a bunch of comments on their facebook, thats it.

We do however want to set the story straight as the label has been disingenuous about their connection with Knights of the Forge in terms of both length of time and knowledge of our political views. We were approached in 2018 by the owner of the label, after we had already shut down this project, he personally talked us into resurrecting it and finishing the album we were working on previously. We were signed long before the announcement and they were not clueless about our political stance and openness about our enjoyment of iced earth as our favorite band since 2002.

We want to thank the many new friends we have made through this ordeal, on both sides of the aisle. Old school Liberals and conservatives and everything in between. New fans and old fans a like, thanks for all the support publicly and behind the scenes. The amount of free publicity we have gotten out of this has been priceless. I wish we could say we planned this out but one off the cuff facebook post 2 years ago was just that, off the cuff. That being said, we'd like to extended our deepest gratitude to the crying bitches who got all this controversy going. Maybe consider putting this much effort in the promotion of your own band.

You can not cancel us. Your attempts to do so has only shown how sad and pathetic your own existences are. Imagine caring this much about an underground band you dont like. If you guys were more intelligent or even remotely self aware youd realize how truly pathetic you are. Knights of the Forge is a two man project, we rarely play live, we have careers and families. This has and always will be our hobby, something we do for fun. Something you will never be able to stop. Something you have done nothing but further motivate and spur on. Good job proving everything we said. Guys please go outside get some sunlight find some meaning in your life.

There isnt a fate much worse for a band or artist than to be ignored. You guys could have just ignored us. Instead you woke up and chose bitch. Guys this is underground metal, we werent getting paid. For all of your fake concern about No Remorse, just know you cost them several hundred dollars at least, that theyll never recover now. Not to mention a reputational cost you inflicted not us. Might want to actually buy something from them if you actually care.

In regards to the ones behind all this. Its hard not to notice where its coming from. May you feel as stunning and brave if our paths ever cross again. Doubtful but we shall see.

The album is available now on our bandcamp(link in the comments.) To hold you over while we find a source to manufacture CDs and possibly tapes now if anyone is interested. Vinyl release will likely remain out of reach for now.

We in no way apologize, or back down. We owe no explanations. Finding out how truly rent free we live in your head couldnt be more satisfying. Are you crushing on one or both of us? What's it like sitting on a screen shot for 2 years? You pathetic shit stains

"Say what you will about us,
we live and die by metal law"

Paul Hissam and Sam Schaefer, Knights of the Forge