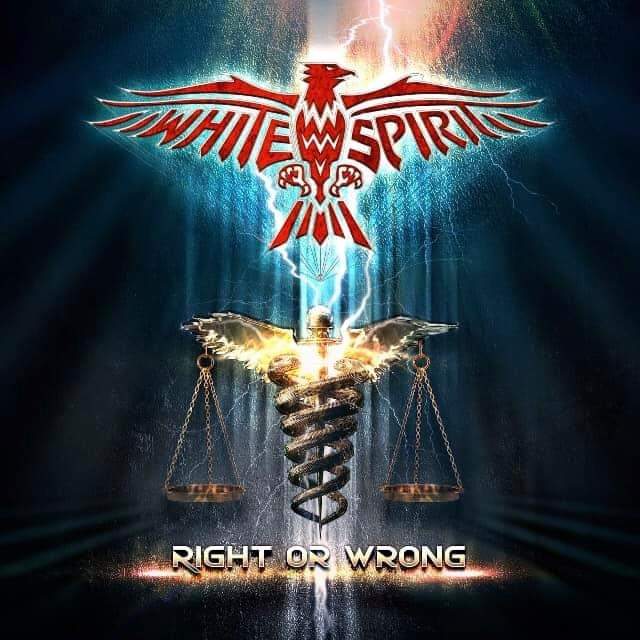 The first single released from the forthcoming album, Right Or Wrong. From sessions recorded over 40 years ago, the first album to feature the vocals of the late, great Brian Howe, White Spirit – Right Or Wrong, is finally ready to be heard by the public. The first single, RUNAWAY is a pure slice of joyous melodic rock.

Brian Howe, who went on to mega platinum success as the singer in Bad Company, revealed his singing class in a barnstorming vocal that showed clearly that he was destined for stardom. After their debut single, Backs To The Grind was released on the legendary NEAT Records in 1980, White Spirit were hot property and courted by the majors. They were eager to snap up a band that had far more to offer than the majority of NWOBHM bands that they were lazily bracketed with.

MCA Records won the race to sign White Spirit, and with a line up of Phil Brady, Graeme Crallan, Janick Gers, Malcolm Pearson and Bruce Ruff, their self titled debut album was released later in 1980 to great acclaim. A constant schedule of touring saw the band build up a large and loyal following, but changes in personnel saw Janick Gers join Ian Gillan, replaced by Mick Tucker, Toby Sadler take over bass duties from Phil Brady and Bruce Ruff make way for an unknown singer called Brian Howe.

The new and improved White Spirit entered the studio to work on their second album with then Gillan keysman, Colin Towns at the production helm. Alas, the album was never fully completed, the band broke up and musicians went their separate ways. Singer, Brian Howe crossed the Atlantic and became frontman for Ted Nugent, before achieving mega platinum success as the replacement for Paul Rodgers in Bad Company.

So White Spirit were seemingly consigned to music history, with former members proceeding to forge impressive careers built on this promising foundation. Four decades on and the location of these 2nd album sessions remained a mystery. Presumed to have been consigned to a skip, as was the fate of so many priceless master tapes carelessly discarded over the years.

The day following Brian Howe’s tragic death from a heart attack in May 2020, Tucker and Pearson were on the phone reflecting on those heady White Spirit days. The missing tapes were once more discussed, but still neither had any idea where to find them.

Fate stepped in, and whilst preparing to relocate to France, Mal Pearson was rifling through his furniture in storage when he found a dusty old bedside cabinet. Inside were four sets of tapes. One labelled Chiswick Studios – White Spirit. This was it. The one they’d all thought was lost for ever.

The tape was handed over to Conquest Music boss and Tank guitarist, Cliff Evans. He arranged for the delicate and risky process of restoring the tapes to preserve and retrieve the old recordings.
Successful as the process was, the sound quality of some elements of the tracks were just not good enough for today’s ears so Tucker & Pearson decided to replace all of the musical accompaniment with a stellar line up of players. Neil Murray (Whitesnake) and Russell Gilbrook (Uriah Heep) made up the rhythm section, with the guitars and keyboards replaced by Mick and Mal.

Pontus Norgren (Hammerfall) was chosen to mix the album in Sweden, and the result is an incredibly fresh body of work with power, finesse, great songs, and amazing vocals. Ten tracks with a nod to the past, but fresh and vibrant arrangements fit for 21st Century ears. One can only wonder what may have been if the album was released as originally planned in 1982.

So the wheel of fate that saw White Spirit disband 40 years ago, turned once more, unveiling the lost tapes that finally reveal the first album recorded by Brian Howe, sounding as fine as he ever did.

Two singles will be released before the album “Right Or Wrong” is finally unveiled in July 2022.

White Spirit is planning live shows, with Tucker & Pearson already writing the next album. We can be sure it won’t be another 40 years before that is released.

The first single, RUNAWAY features Brian Howe’s fine vocals and will be released on 20th April 2022, accompanied by a brand new lyric video.

It features the exclusive radio edit, alongside the full, album version of RUNAWAY.

The link to presave RUNAWAY on digital services is below.

τι λες τώρα! Brian Howe λατρεία!
We scribe in the dark of the night our Black Steele
The evil rite of the black and the light We now reveal to you
Κορυφή

Και.... ΚΑΛΟ ΚΑΛΟΚΑΙΡΙ!
"I looked in their evil eyes and they crouched like cravens,
I showed them my sword, and they trembled and louted low.
I gave their bones for food to the rats and ravens,
And I pray the gods for another and fiercer foe."
Κορυφή

το θέλω, το ποθώ
We scribe in the dark of the night our Black Steele
The evil rite of the black and the light We now reveal to you
Κορυφή