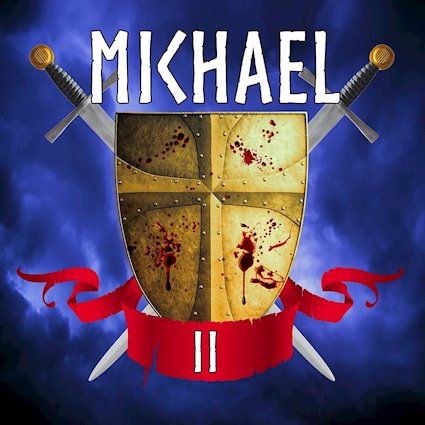 This album has NEVER and we repeat NEVER been released before in ANY format whatsoever! So you are hearing this song as a WORLD PREMIER as no one has EVER heard this album before! Check out this brand new track from Michael entitled ‘Lost At The Cross’

Now check out the story behind this Long Lost and NEVER before released album in the words of Shane Freeman of Michael!

“Shortly after the release of ‘The Battle Rages On’ life happened for Michael. Drummer Dennis Raymond left the band to focus on his family and was replaced by former Stutz drummer Vaughn Zajicek. Shortly after, keyboardist Todd Waites was forced to leave as his job moved out of state. Finding a replacement seemed futile so the band decided to move forward as a power trio. The song writing was geared to be more guitar oriented to fill the void where the keys once sat. Michael II was completed and studio time was booked just a week prior to entering the studio to cut the album. Mike Slone left for medical reasons, leaving just myself and Vaughn. We decided to march on and complete the recording, no matter what. Vaughn handled the drums and did everything else. We even hit up former Stutz lead player Jerry Roelke to play a solo. After the album was tracked Vaughn and I decided to go our separate ways. Michael was officially over and this recording would never see the light of day, until now! Thanks to Roxx Records this release finally gets a proper pressing I’ve always believed in Isaiah 60:22 “When the time is right I, The Lord will make it happen.”

This brand new release is being released on CD in a very limited physical CD pressing of only 300 copies. This CD has been immaculately put together with Rob Colwell of Bombworks Sound completely remastering this never before released album. It also features a killer 12 page booklet in a jewel case with brand new artwork and layout designed by Scott Waters of No Life Til Metal Graphics.

Official release date for this package was scheduled for April 17th but will unfortunately be delayed as a result of the recent Covid 19 plant closure. The CD preorder is live and you can still order the physical copy to get upon releases for the introductory price of $11.99 right now we are shooting for May 29th, but that could change again.

As a result of the delay ALL pre orders will receive a digital file of the release to hold them over until the physical CD arrives.