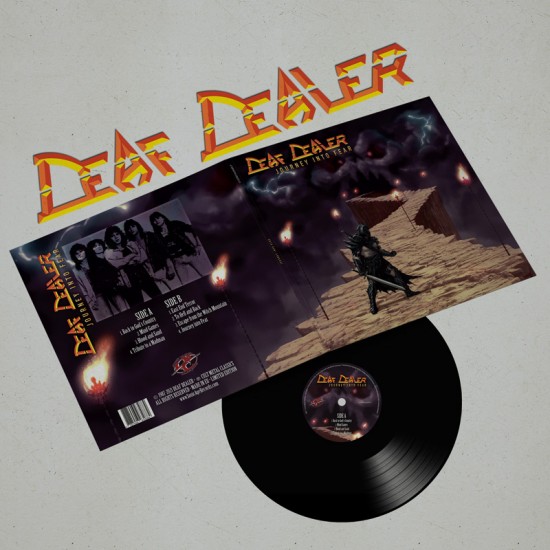 "Journey Into Fear", by the Canadian metal masters DEAF DEALER, has been Canada's best kept metal secret. The album was originally tracked in 1987 at the world-famous Toronto studio Metalworks with Dan Johnson and Scott Burns as producers, but for various reasons was never officially made available. A few cassette copies were circulated in the metal underground, and the LP eventually gained a cult status, with many fans going as far to call it "the greatest metal album never officially released." "Journey Into Fear" features the distinctive bass playing of bass virtuoso Jean-Pierre Fortin, coupled with great guitar lines by Marc "Hayward" Brassard and Yves "Ian Penn" Pedneault along with classic vocal lines by Michel "Flynn" Lalonde. Combined with way-ahead-of-its-time power drumming by Dan "Mc Gregor" Gregoire, the effort definitely deserves a spot among the greatest heavy metal creations of the '80s.

Based in Quebec, DEAF DEALER started in the early '80s as DEATH DEALER, and made an appearance on the legendary compilation "Metal Massacre IV" in 1983 with the song "Cross My Way". A short time later, the original singer Andre Larouche was replaced by Lalonde and the band changed its name to DEAF DEALER. They released a highly acclaimed debut in 1986 under the title "Keeper Of The Flame" and in 1987 they recorded eight songs that were never released. Soon after the recordings were completed, the group disbanded.

Side B:
1. East End Terror
2. To Hell And Back
3. Escape From The Witch Mountain
4. Journey Into Fear