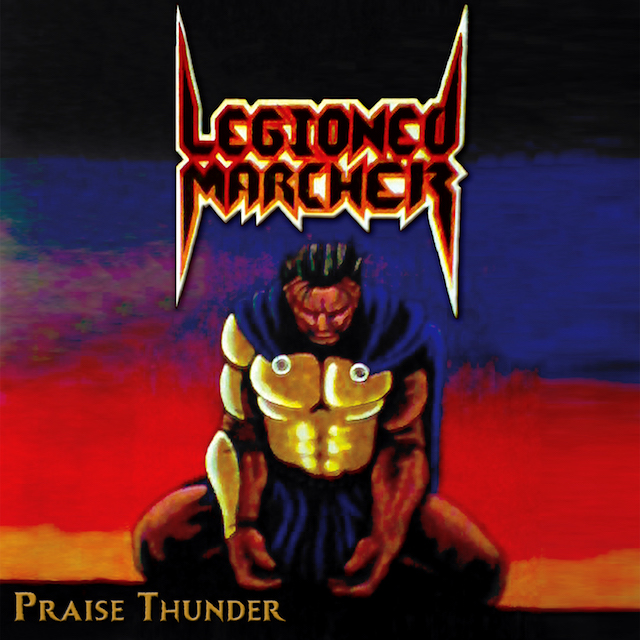 The band was formed in 1986 and split a few months later, on 1987: "We were a band less than a year...", bassist Rev. Jones recalls. During this very short period LEGIONED MARCHER have managed to record two of the most remarkable songs in the entire US Metal realm: "Praise Thunder" and "Under Fire". Both those hymns were recorded and mixed in just 35 minutes on a local studio. The band did not have the cash to make an official demo release, so they just duplicated their two songs on tapes that were spread hand in hand around Oklahoma City.

We are in the mid -to late- 80s, when the actual core of a very important part of the US Metal underground, is born by such newcomers as Legioned Marcher, in rehearsal spaces, recording studios and smaller or bigger venues. Many of those bands would move forward to record and release albums that today are regarded as classics. LEGIONED MARCHER unfortunately did not make it, leaving behind just two recorded pieces of Metal history, their two demo songs.

It took us many years to collect every single piece of audio and visual material that would justify an official release of the band's legacy. Their two studio demo recordings have been remastered from the best possible source, shaping the main part of this release. We also managed to discover the band's entire debut live show at The Diamond Ballroom, Oklahoma City, OK (September, 12th, 1986). Two officially unreleased songs are featured on this particular live recording. The complete show (four songs in total) has been also remastered -by Kostas Scandalis at Infinity, Studio (Thessaloniki, Greece)- and added as bonus.

The original artwork that has been designed for the band by Larry Sutterfield is used for this release. Kostas Athanasoglou has restored the entire original drawing, practically saving the original band logo. Every single band photo that could be tracked down is used on the booklet and the lyrics of the two masterpieces are officially presented for the very first time.

Chris Papadakis interviewed Rev. Jones, bassist and founding member of LEGIONED MARCHER and the complete interview is featured in the booklet including a wide range of information about LEGIONED MARCHER.

Through this official release Arkeyn Steel Records does justice to one of the most talented US Metal bands out there. Their recordings speak for themselves and now you will have the chance to put them beside the classics on the shelf with the US Metal masterpieces.

Thunder and fire are rising! Beware the MARCHER!