Nameless Grave Records is proud to announce a partnership with American power metal gods Twisted Tower Dire to release never before heard specially mastered alternate recordings of Crest of the Martyrs, the way they were meant to be heard! Official promo text below- but long story short, this is an original set of demos featuring the Crest lineup of the band recording the same songs to show their then-label with a slightly different set of arrangements, production much closer to the band's vision than what ended up being released, and I much prefer these versions over the official Crest and am extremely excited to be able to handle this release with Nameless Grave Records!

In the days of olde, after classic heavy metal was supplanted by extreme music and before the current reignition of interest that the genre has enjoyed, Northern Virginia’s TWISTED TOWER DIRE tirelessly defended true heavy metal in all forms as they sought to breathe new light into a then largely dead genre. By the time their now-legendary third album Crest Of The Martyrs was written they were on top of the world, having played Wacken for the first time a couple years earlier and having released two full-lengths on The Miskatonic Foundation, run by Rich Walker of Solstice fame, as well as a wide array of EPs, splits, compilation tracks, and more.

Crest Of The Martyrs was the next step: a bigger power metal label, sleeker production, and TWISTED TOWER DIRE’s biggest hooks and choruses yet. Underneath the gleaming power metal edge provided by the production provided by the label and studio still lurked the same triumphing true metal band, however, and for the first time Nameless Grave Records is proud to present Crest of the Martyrs the way the band originally intended it: as a devastating, lean set of heavy metal bangers untouched by modern power metal production, and alternate studio decisions.

Old fans of the band can rejoice to have these different set of recordings available for the first time, and new fans can marvel at the powerhouse of one of America’s finest bands playing at their best. Highly recommended for fans of Visigoth, Pharaoh, and Omen.

Recorded in 2002 at Killabrew Studios, produced by Matt Crooks and TWISTED TOWER DIRE, and mastered by Dan Lowndes at Resonance Sound Studios, Crest Of The Martyrs Demos is completed with artwork personally done for this release by guitarist Scott Waldrop. The CD version features bonus tracks not included on the vinyl, including a second demo as well as a live track from Wacken 2003, and both the CD and vinyl editions bear liner notes from the band. The LP will be pressed in a total run of 500 copies, including 300 on Black and 100 on Silver. No Remorse Records (Greece) will have an exclusive 100 copies on Light Blue vinyl. 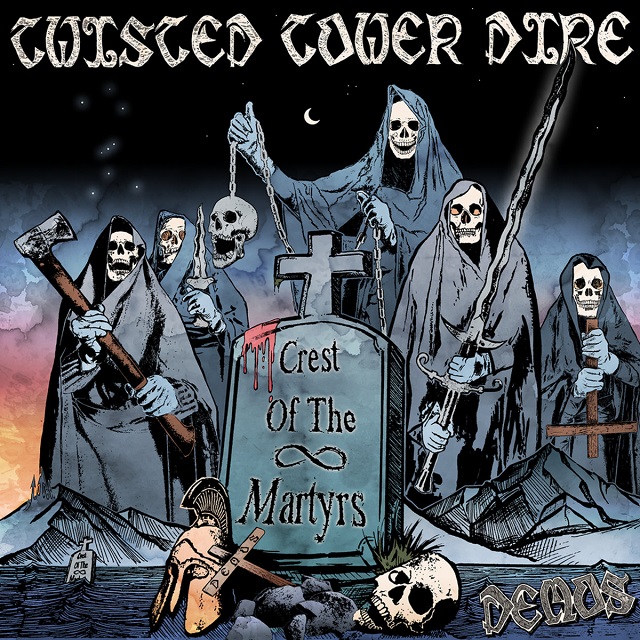 1. At Night
2. Some Other Time, Some Other Place
3. Axes and Honor
4. To Be A Champion
5. Infinitum
6. Fight To Be Free
7. Transfixed
8. Guardian Bloodline
9. The Reflecting Pool
10. Axes and Honor
11. False Orion
12. Axes and Honor (Live at Wacken 2003)
They shall grow not old, as we that are left grow old: Age shall not weary them, nor the years condemn. At the going down of the sun and in the morning, We will remember them.
Κορυφή

επανηχογραφήσεις?
We scribe in the dark of the night our Black Steele
The evil rite of the black and the light We now reveal to you
Κορυφή

Αν κατάλαβα καλά ηχογραφήσεις του τότε, αλλά διαφοροποιημένες σε σχέση με το τελικό οφίσιαλ αποτέλεσμα.
They shall grow not old, as we that are left grow old: Age shall not weary them, nor the years condemn. At the going down of the sun and in the morning, We will remember them.
Κορυφή