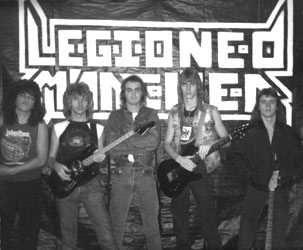 Could you please give us a short biography about the band?

"The band was formed back in 1986, the founding members were Bill Dollins (vocals), Ron Phillips (guitar), Everett Levingston (guitar), Rev Jones (bass) and Chris Packhorse (drums). Our influences were Judas Priest, Iron Maiden, Dio, Ufo, Metallica and Queensryche. Later on, people often compared us to Crimson Glory and Fates Warning, but back in the days we really didn´t know about this acts."

I read in an interview (that you did back in 2013 with the Forotten Scroll fanzine) that Legioned Marcher actually were a product of two local bands disbanding, Xexeus and Metal Haven. What kind of music did this groups play? Are there any recordings available that we can listen to?

"Both were cover bands doing Priest, Maiden, Metallica, Crue, Dio, stuff like that. XEXEUS was my first band, it was Rev Jones on bass, Ron Phillips on guitar, Bill Dollins on drums, and we had a couple different singers before moving Bill from drums to vocals and added Chris Squire on drums. But after about 2 months Chris had to move out of state so we had no drummer. We heard that METAL HAVEN (with Chris Packhorse on drums & lead vocals, and Ev Levingston on guitar) was looking for a bassist and singer, so we thought maybe if we (Rev and Bill) played a show with them we might be able to convince them to combine both bands to 1. So me and Bill joined METAL HAVEN for 1 show, then told them we wanted to combine and start a new band. They didn't want to at first, but once we got together and played we all knew it was right.
No recordings of XEXEUS. I know that the 1 show I played with METAL HAVEN was recorded on a reel to reel tape machine, I heard it once way back then but have no idea if anyone has a copy. Remember those days it wasn't easy to record shows, either it was real expensive to get recorders or you used a cassette player to record which sounded awful. We were all kids 15-19 years old so we had no money."

You guys recorded only the two well known demo tracks back in 1987, but what about more stuff. How many more songs did exist and how were they called? Did they sound similar to the two demo tracks and did you ever record them on tape?

"We had a bunch of songs, trying to remember them, I know I'm forgetting a few but here it is the main songs we had: Under Fire, Praise Thunder, Soldiers Of Fortune, Coming Of The Storm, Instrumetal, The Chosen, Legioned Marcher, Resurrection, Shoot To Kill, Return Of The Knights, A.H. 5008 and My Love. They all sounded like LEGIONED MARCHER. I have a live recording and video with 5 songs that is great. I also have a live cassette player recording of a rehearsal that has 3 or 4 other songs that sounds ok, but it is a different drummer and only 1 guitar. I've talked to a couple of people about releasing all of it, video, live recording, rehearsal, pictures, 2 studio tracks (I have the only good sounding copy of the songs), and doing video interviews with each guy talking about the band. But they never got back with me or just wanted me to give them all the stuff free. I would put it all out now, but only if we were compensated for getting it together, and if each guy got so many copies and at least a little money or a percentage of sales. I would love to have it released, I'm the one that posted the lower quality studio songs on youtube so people could hear it. But I won't let someone have all of it without each guy involved getting something."

In the last few years a lot of people asked for a Legioned Marcher reunion but noone really thought that this would ever happen. Some weeks ago I read a facebook statement from Chris Packhorse stating “currently recording Legioned Marcher”. What can you tell us about this? And if this is really happening, would you please go into detail. What can we expect, old stuff, new stuff, live stuff?

"I'm not sure what they are doing. Chris mentioned to me a while back that him and Ev were gonna record a couple of old songs, and I told him to send me the tracks and I'd play bass on it, but I never heard if they recorded or not. I heard they were jamming with a singer we've all known forever and I heard that Ron was maybe playing with them. But I don't actually know what they are doing. It wouldn't be LEGIONED MARCHER without the same original 5 guys. Before we disbanded in 1988, we had several lineup changes that didn't work, the last version had original FORTE singer Jimmy Randel. But we only did live shows with original 5 guys because that was the only lineup that was perfect. So thats why I say "It wouldn't be LEGIONED MARCHER without the original 5 guys".
I think it would be cool & fun to get together and do 1 reunion show or record all the old songs, and if all 4 guys agreed to do it, I would be there for sure. But anything else like writing new stuff or whatever, I wouldn't really be interested in.
The thing is about bands that people don't think about is that part of the chemistry is the perfect lineup, but a bigger more important part of that chemistry is the drive/personality/fire/attitude/influence of each person at that exact moment in their life, and all of those things change in everyone every year of life, thats why bands have a hard trying to recreate that special thing that once existed.
LEGIONED MARCHER was Rev Jones, Ron Phillips, Bill Dollins, Chris Packhorse, and Ev Levingston in 1986-87!!!!!"

We all know that you joined the mighty Forté in the eraly 90s and that Legioned Marcher vocalist Bill Dollins followed you a few years later. But he left after only one album and to this day this is his last known stay with a band, which by the way is a pitty as his voice sounded so fucking strong in both of these bands. To me especially his vocals in Legioned Marcher were up there with the great ones of the US Metal genre and it´s a shame he disappeared into oblivion.

"Yes I got Bill to join FORTE for the "Division" album and he was in the band until I left. He actually only stayed in the band because of me, he really didn't want to be in a band anymore but he didn't want to quit on me and leave us looking for a singer. I see him ever so often at a store or restaurant, we say hi talk for a minute. There are a couple of other bands that he recorded with. He was in a band with the guys from POWERLORD called AGENT X and recorded a demo that wasn't released (but you can probably find a copy online). He also did an album with SYMON SEZ which featured the original guitar player from XEXEUS Jimmy Skaggs, I can't remember if it was released or not, but I could probably get a copy for you since I still Jimmy often."

What are the members of Legiond Marcher doing nowadays?

"Not sure. I talked to Ron not too long ago he said he was writing some songs and working. I talk to Chris every now and then, I think him and Ev are still playing together. And I ran into Ev about a year ago up at my old rehearsal place. I'm not sure what Bill is doing.
I'm still playing with STEELHEART (new album 2017), and LESLIE WEST (mountain), and BLASTED TO STATIC (new album 2016), and I still tour occasionally with MICHAEL SCHENKER GROUP. I also have a REV JONES BAND album coming out in 2017, featuring Jeff Martin on drums, Jim Dofka on guitar, and Rev Jones on vocals/bass…."

τεράστιος παιχταράς!
We scribe in the dark of the night our Black Steele
The evil rite of the black and the light We now reveal to you
Κορυφή