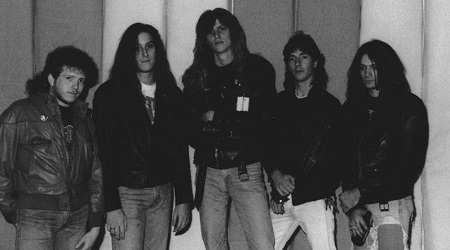 Let's start with an obvious question: When and how were Enchanter formed? Who was part of the band in the beginning and which bands and musicians were your influences?

Enchanter formed in 1985 with the three original members being myself (vocals), Frank Chiappetta (lead guitar) and Brian Pristelski (bass). We all went to Forest View High School in Arlington Heights, IL. I had met Brian the year before when a mutual friend introduced us believing we looked alike. Oddly we found out we both shared the same birthday and instantly bonded. During this time Brian started playing the bass, and joined a band called Squirrel. I think perhaps I may have been jealous of this band taking my new best friend from me so I wanted my own band. I had a guitar, but let's just say it was something that looked cool in my bedroom more than sounding good in my hands. But that wasn't going to stop me. I talked to friends from my old high school and one guitar player seemed interested. Enter the start of my sophomore year, I spy Frank in my art class with long hair and an attitude. Later that week Brian and I questioned him about being in a band. He said he was a guitar player and we told him what we had going. Frank however being a Randy Rhoads fanatic wanted to be a solo guitar player. We went back to Frank and I said "Hey listen, I suck at guitar and the other guy goes to a different school". We asked him to my house to audition, he accepted, then Frank proceeded to play both vinyl sides of Blizzard of Oz flawlessly. I remained composed, but inside I was thinking "HOLY SHIT!!". Let's face facts here, there may be many unbelievably talented youngsters out there with guitars nowadays, but in 1985 finding a sixteen year old who could play Randy Rhoads like that was like finding a winning lottery ticket.
So we started playing in my garage, looking for drummers all the time. Our first drummer was actually Michael Mooshey, from 7th Heaven but that only lasted for one practice session if I remember correctly. I don't recall exactly why we went our separate ways after this practice, but Mike was already in 7th Heaven at that time and that likely had something to do with it.
We found Mike Piazza thanks to Frank, who would hear Mike playing drums in his garage as he walked passed his house on the way home from school. Mike seemed uninterested, likely due to the fact that we had all just transferred to Forest View from elsewhere and he had no clue who the hell we were. He eventually submitted to Frankm, who by the way had a way of getting people to do what he wanted. Mike brought his drums to my house and we officialy became Enchanter, named after Tim the Enchanter from Monty Python and the Holy Grail. Franks previous band had been named this and he insisted that Enchanter had to be the name. We did not care.
The last true original member of Enchanter came along not long after Mike. Still one of the coolest motherfuckers I know, John Tolczyk a.k.a. Toll-Zack (guitar). This was actually Frank's idea as Metallica, Iron Maiden, Judas Priest and Queensryche all had two guitar players and playing those covers was difficult to say the least with only one. John was not with us very long and I have no memory of why we went our separate ways.
You've had a taste of our influences above. I cannot speak for everyone, but my influences are gigantic, from Tchaikovsky to Slayer, Cream to Pink Floyd and lest we forget the women who unwittingly taught me how to sing, Annie Lennox & Ann Wilson. I sang Eurythmics & Heart songs relentlessly trying to mimic everything as well as harmonies above and below. It was of course mimicking the Metal God Rob Halford that taught me to scream and I'm sure much more, but I attribute my vocal ability and range to Annie & Ann.

Moving on to 1989 and your demo. The Gates Of Insanity was produced by Phil Bonnet, a famous producer, engineer and mixer in the Chicago area who also worked with acts like Syris, Squadron and Aftermath. How did you manage to get him for this job? What happened after the demo, how were the reviews? Did you guys play many live gigs?

Phil worked at the studio we booked. We found it in the back of a local rag called the Illinois Entertainer. Just the luck of the draw I guess. R.I.P. Phil.
Incidentally, whereas I engineered and the band collectively produced seven of the eight songs on the unreleased Patterns Of Violence album, we'll talk about that in a minute, Phil engineered and produced the song No More. Which is why it sounds leaps and bounds better than the other seven recordings. I was taking an audio engineering course at the time.
By the way, The Gates Of Insanity was actually our third demo, it just was the only one we mass produced. We had some very positive (local) reviews but it basically went unnoticed by the industry as a whole.
We played live as often as we could sometimes even paying to be on the bill of larger shows. We had no idea what we were doing, and had no one to help us.

There are two different covers for the demo circulating on the internet. A painted one with a gate and a version showing a gate with a church behind it. Which is the original one?

This part should be called "The lawsuit". I'm betting you can guess why, too. We were not authorized to put the image of the Serbian Orthodox Monastery of St. Sava on our cover, nor did they appreciate the title being associated with their church. So we went to Frank Pusateri (All Enchanter art work with the exception of the original t-shirt and Mike's bass drum skins which were done by me, were the works of the incredibly talented Frank Pusateri) and he drew the 2nd cover with a pencil. We had that made in to stickers and stuck them right over the image of the gates. The lawsuit went nowhere, plus they did finally read the lyrics and once finding out that we were writing about drug abuse (Never Too Young) , prolonged life after brain death (Coma), war (D.O.L.) and a movie (Progressive Entrapment is about the movie Witchboard) everything calmed and just went away.

Besides the original tape version there also exists a bootleg CD of The Gates Of Insanity which comes as a split release (with The Second Death from False Prophet as part of the Convicted To The Avant Garde series in the early 2000s) from a greek bootleg label. Were you aware of this and what do you think about it?

I was aware because through the years a lot of Enchanter and Cyclone Temple fans from Greece contacted me through facebook about it. Speaking only for myself, I couldn't care less. We were writing about things we believe in, the point to me, is to have those things heard. I sent most of the people who bought that and contacted me about it a link to download "Patterns Of Violence".

Your second output Patterns Of Violence was never released. I read that you guys recorded eight tracks for a release but this never happened. Why? There are some live videos from Enchanter on YouTube performing songs like My Last Breath, Gimme A Break, Patterns Of Violence, Never Too Young and No More. Are these some of the songs you wrote for the album? These songs sound more aggressive and less melodic than the demo stuff, was that on purpose?

It was never released because we kicked Frank out of the band. He had gotten a bit overly aggressive with us (in our heads anyway) and then the band came to me saying Frank wanted to kick me out. So I retaliated (childishly). What I had done was to effectively remove the driving force behind the band, and I know not all the guys agree with this, but it is what I believe. Frank was our "band dad", he made us practice, he made us write, it was a bad move that I regret.
The new sound was just us growing up, becoming more technical players and getting angrier. You must understand, we did not have the money to record songs as we wrote them, some of the songs on our recordings were written years before being recorded. Also, No More, Gimme a Break, and Endangered Species initial guitar parts were written and arranged by me, and I wrote melody first, rhythm after. Frank had become enamored with Testament and Overkill, so his writing got faster and more technical. Dan Sebo also contributed a song in there called Reign of Terror, so it was basically a compilation of our different styles.

You joined Cyclone Temple in 1993 if I'm right. Was this the reason Enchanter fell apart? What did the other guys do after the split? It's a shame that all these talented musicians never created music again. At least there is no information to be found on the net.

Cyclone Temple came after we had replaced Frank twice so not really, but sort of. Frank's first replacement Dino, was an outrageous player but also a drug addict who sold my one of kind, tree of life guitar, for drugs. Enough said about that. Frank's second replacement was none other than Joe Pettinato (who had huge international success with local grunge heroes From Zero).
This is where I make apologies. I do not regret my time with Cyclone Temple, I do however (through 20/20 hindsight) regret leaving Enchanter (renamed Terror Firm at that point) to do it. I knew Joe was a good player, I liked Joe and he fit well with us, there was a lot about Joe that I did not know. He has perfect pitch and is very likely the best musician I know. But at this point I was disenchanted. I hadn't lost hope in the band, but had started to not care anymore. It became more of a thing I did with my friends. So when I got the call from Shawn Glass (Broken Hope, Soil, Dirge Within, Repentance and the indomitable Sindrome) that Cyclone Temple was looking for a vocalist I jumped and that was that. Joe obviously went on to found From Zero, Karl joined a band called Prisoner for a time, Mike entertained joining Zoetrope (but didn't) and Dan joined a blues band. Frank joined Stygian for a time but then let go. I am happy to report that Franks younger step brother Anthony Nasselli started playing drums and they formed a cover band together. They play some shows here and there and I can tell you he's still got it.

I wonder if Enchanter ever were approached about doing a proper anthology release (demo, unreleased album, extra stuff that can be found on Youtube), which by the way is loooong overdue. Were there such talks in the past and what are your thoughts about it?

Yes, but it wasn't an approach. In 2012 Cyclone Temple signed with Divebomb Records to rerelease the entire discography and I sent the label the Enchanter stuff. They were excited and willing, but Frank said no. So, I guess you or a label should better talk to Frank about it.

THANX for doing this, Sonny. It was nice to finally hear some valid information about ENCHANTER, this long forgotten wonderful band....and now let's see what we can do about the mentioned rerelease!!